The official summary first, followed by my stage report.

Official info from HR: The first stage of the Haute Route Alps – organised from Geneva to Megeve for the third year in a row – seems to be a classic. But it’s deceptive! Riders hoping to ease their legs in gently should prepare for a tough start in Haute-Savoie – even harder in 2013 than previous editions. Ride wisely. Don’t over do it on the pretty Col de l’Encrenaz, which climbs steadily from Taninges, 50km after leaving the shores of Lake Geneva. After 1443m of serious cycling, past Les Gets, it’s then straight into an attack on the Col de Joux Plane. Riders will ascend via Morzine, less extreme than by Samoens, but with an average gradient of 7% it’s by no means the ‘easy’ way up. Beware of the steep descent – don’t get carried away!

Well, it has started and I survived the first stage!  Before reporting on that, let me say a few things about last night.  At 6pm, we had the opening “ceremony” (with Bon Jovi blasting) and they really got everyone excited.  One surprise: 3-times Tour winner and 2-times World-Champion Greg LeMond will ride with us a few of the later stages.  That’s pretty cool!  (I hope I will still have juice in the legs then.)

Back at the hotel, I prepped kit and bike –with an early start of 7:15, I had to get up by 5:15am just to shower, eat, get bags down, ride to the start, pump tubulars, pee (always before a race :), and line up…  Everything nicely organized:

To help me navigate the course and dose my efforts (it was really helpful!), I made course summaries that I put on my top tube.  The other part on the cockpit is my race number which has the timing chip attached.

And on to the first stage: Sunday morning, depart at 7:15am–and we started EXACTLY at 7:15am (I do like that Swiss pucktlighkeid!).  First 65min was a neutral start, getting out of Geneve and through some small roads and villages to the border with France.  The 600 participants were self-organized in 5 groups of about 120 with each a buffer of motorcycles and gendarmes in between for safety.  The first group were those who “want to go for time.”  (Neal and I were there, ha.) Tomorrow, only the top 75 of the general classification will start separately, 5min before the rest.

The neutral session went fine, EXCELLENTLY escorted by many motorcycles (>35 in total–compare that to 1 when we race in the US), I don’t know how many cars (Mavic support, race directors, medical etc.), and volunteer traffic controllers at every intersection.  I was/am very impressed with this professionality–this is as close an amateur race ever gets to the pro experience…

Pace was fairly mellow during the neutral session with the exception of one short hill that suddenly was taken at race speed–that took me by surprise. oh, I should point out that I saw two guys peeing from the saddle during a neutral section! Couldn’t believe they didn’t take a pee stop, like me and many others.  Luckily I was not in their draft!

At 8:20pm, exactly as previewed in the “expected time sheet”, our group started the timed section.  Pace increased, naturally, but not crazy.  Suddenly, Peter Pouly (the winner last year and form pro French mountain bike champion–this guy put out 6.0W/kg last year on the TT of Alpe d’Huez where he set the amateur record of 42min.   Those are world-class numbers, and typically the border where doping is suspected.  Chris Froome on his Ventoux win this year put out about 6.0W/kg in last 18min).  OK, so Peter Pouly and his Thai team friends attacked and broke away.  The peleton chased and caught them, but the pace was up.

The race only really started, as expected, at the first climb.  Peter and co put a strong tempo down.  I followed but clearly was about my sustainable power levels and started falling back.  Neal hung.  After about 10 min I decided to set my own pace.  I had hoped to hang on longer but decided I didn’t want to blow up–it was still a long way to go with 3000m to climb.  That was a good choice: the top guys are way out of my league:  I finished the timed section in exactly 5:00, Neal in about 4:42, but Peter Pouly in 4:10!

Once I was riding my “race” pace–wanted to keep heart rate below 170 on the climbs, and not the 173 during the first attack of the climb–, I hooked up with some others with similar pace.  That actually worked out well; I saw similar guys back on the first two climbs.  the first descent had been briefed the night before as dangerous so I took no risks, but saw two guys in the ditch.  (Neal, who by this time was ahead of me and out of sight, ended up calling and waiting for the meds for a guy who went into a ravine just before him.  The guy turned out to be lucky, just a broken finger.  Neal received the special new award: “Coup de Coeur”.  rightly so!  He said he lost 4-5min while 40 others passed him.  The organizers said they would adjust the time; I think he was raised two positions.)

My descent went fine–I didn’t think it was that dangerous, but it all depends on expectations.  The second climb was a cat 1 and the hardest of the day: starts with 11% and never below 9% for quite a while.  But I managed just fine–legs were good, HR in control, and I was keeping position, even picking off some guys.

I didn’t stop at the “revaitissement/refreshment stations at the top of the climbs, as I had my food and drinks.  That was a good decision because the second descent was followed by a 10km+ flat and I wanted to be in a good group.  (Riding that alone would be torture and time loss.)  I did catch a group of 7, and the 8 of us worked well together and rotated.

Then there was a “bump”: a climb of 300-400m.  The 7 guys took it hard; I hung for a while but again decided it was just a little above what I wanted and let go.  Another guy caught up with me and we worked well together.  On the descent of the bump our group grew to 10-ish and we went together on the false flat towards the last climb towards Megeve.

It was km 140 and I felt good, if not great, but started getting hungry.  In the briefing, it was clear that the third climb was a cat 2 but the easiest of the three.  But my expectation (and those of many others) was way off.  There was a “deviation” that took us up a little “chemin” that was really steepI wasn’t prepared for that and that was the first time I suffered.  I also starting getting hungry (even though I had a BIG breakfast and had been eating)–not surprising if you see the numbers below…  It got so tough I was wondering whether I would have to walk (had NEVER considered that option before).  And then I saw a guy walk!  (Turns out he cramped up–I bet many will walk that “beast,” Shannon’s description of the Bolton VT climb).  Anyway, I got through it. .

I stopped at the last supply for 3-4min and rehydrated. (First time I drank regular Coke in many years + they filled my bottle with water.)  The remaining 10km were less steep, and gradually flattened in the last 3km. With three km to go, a nice Belgian guy passed me and told me “allez, kom mee”.  I grabbed his wheel for a while but decided to go my own pace–I was still pushing 220W after 6hours so I was happy with that.

24.7kph avg (including slow neutral 1hr, so not bad given the climbing)

And here are the big numbers (for me–many guys here are much stronger):

The good thing now is that I can eat continuously: I just got this from the Carrefour and am now having dinner ! 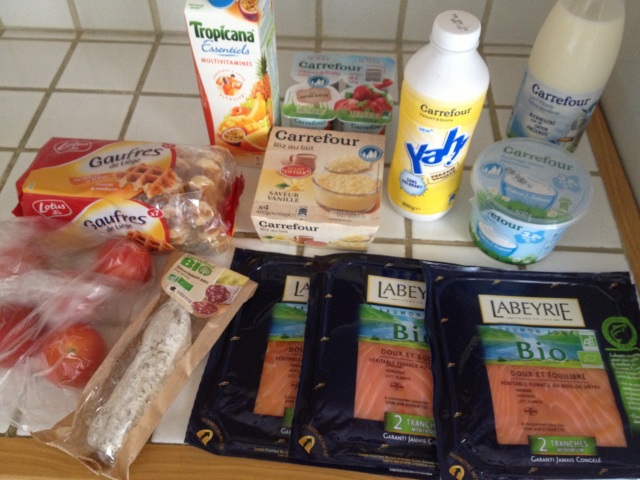 Happy with my first day.  Curious about day 2…

Like Loading...
This entry was posted in Cycling, Haute Route and tagged race report. Bookmark the permalink.