Did my cycling power really increase this winter on my Wahoo Kickr? Power accuracy and thermal drift on my Kickr

Do you train using a Wahoo Kickr that is in your garage or in a colder area like me?
I probably bought one of the first Wahoo Kickr’s in 2014 and was a beta user on Zwift. The Kickr is awesome and has brought me a lot of joy except …. for the finicky power readings who tend to deviate, sometimes substantially (30 to 50W) from my crank Quarq power meter. When I got my Kickr, I even got the mechanical calibration kit but all seemed ok. Then I got into Zwift group rides and races and forgot about the power discrepancy reported by my Kickr.

This winter, however, I decided to adopt the Zwift 12-13 week FTP builder protocol. To start I did the Zwift 20min power test with my Kickr controlling the resistance in Zwift. I know my FTP falls in winter and when testing indoor, yet I was so happily surprised: this was my first 20min indoor test during which I wasn’t dying or thinking of giving up AND the numbers were better than expected.
That is: the numbers reported by the Kickr power meter. Unfortunately, my Quarq reported quite different numbers (see Fig 1). 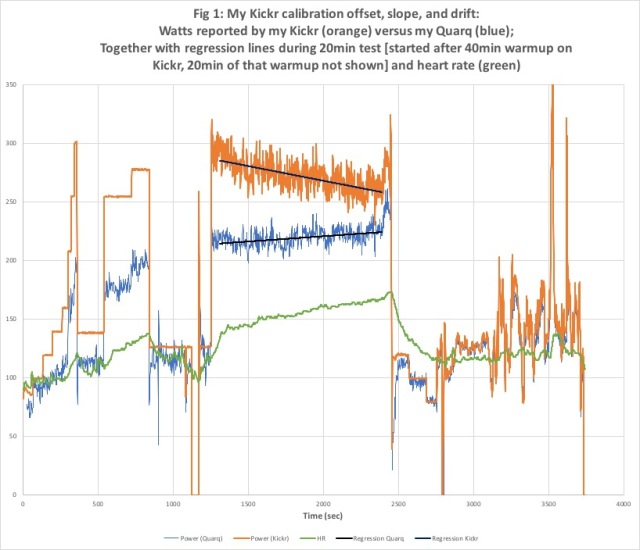 Note that Zwift uses erg mode except during the 20min test, which finished at about 2800s after which I rode some more in non-erg mode. I also show the OLS regression lines during the 20min test to show the slopes: I was “negative splitting” so that I could increase power near the end—as was evident by HR upward drift and last min power surge. The key is that the power recorded by my Kickr was 1) way higher initially (up to 50-60W) and 2) drifting down even though the 20min test started after 40min warmup on my Kickr while 3) the Kickr was NOT in erg mode and 4) I was negative splitting (hence riding harder as time progressed during the 20min as the Quarq regression line and heart rate line shows). Let me explain why, but first

I probably bought one of the first Kickr’s. This weekend I did an FTP test and had a bike with Quarq power on the Kickr. After the recommended 10′ warmup I did advanced spin down, also calibrated my Quarq, and started the 45′ Zwift FTP protocol. My quarq was showing 220W, Kickr power showed 290W! I can live with 5% variance (total claimed accuracy of both meters) but 70W/220W = 30%… And I redid this with another bike that has another Quarq power meter with same results. What do you suggest?

Wahoo was sorry to read this and recommended I 1) shouldn’t do a regular advanced spin down; 2) clean the optical sensor on the Kickr and 3) use the Quarq in Zwift to control the Kickr resistance. I did 1 and 2, but I want to be able to use any bike (without a crank power meter) on the Kickr, so investigated further.

I have been investigating this and notice that the Wahoo Kickr power meter watt numbers fall as the Kickr warms up—but it takes longer than 1hr for them to stabilize (and not the typical 10min). Is that because my Kickr is in my sunroom, which gets fairly cold in winter, so it starts at cold ambient temp ? (I live in Chicago and our sun room is only half heated and separate from rest of heated house. Inside wall temp is perhaps 55, but my Kickr is closer to outside window so colder.
Is there no temp compensation algorithm in my Kickr1, or anything to compensate?

“suggestion would be to do a twenty minute warm up, then do the spin down on the KICKR and calibration on the power meter at the same time. The developer believes that this will help pin point which power meter is drifting. Though the KICKR regression is going down, the Quarq is seeing an upwards trend when both should be effectively straight lines if you are doing an ERQ workout.”

[The latter sentence is incorrect as the 20min test is NOT in erg mode. And even if erg mode were on, if there is temp drift during warmup while the Kickr power drives Zwift to control resistance, the resistance control changes over time (as the Kickr power reading drifts down) and effectively I have to start pushing harder. So, one would never see straight lines if there is drift.]
Anyway, I did 1) go back to the strain gauge for power measurement in the Kickr and 2) follow the spin down suggestions and did one after 30min on both Kickr (and Quarq) and another after 60min, reported on Fig 2: 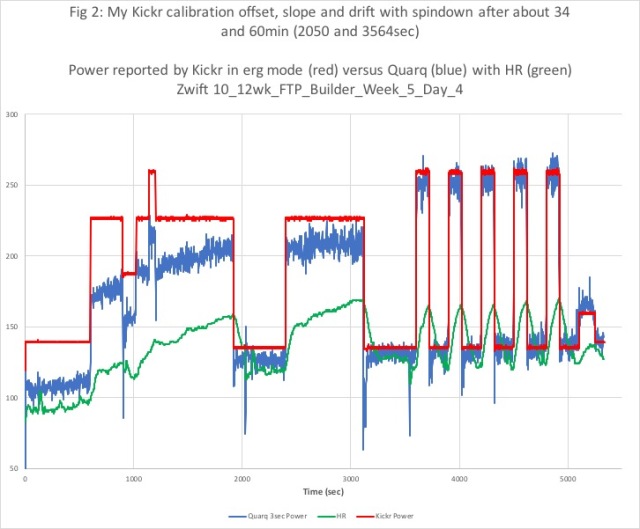 I did what you suggested: 30min in did spindown and also Quarq power meter calibration. Repeated after 60min. As you can see in the graph, the thermal drift remains; it takes about 1hr for MY Kickr to converge to true power reporting.

My two graphs now provide “convincing (or at least reasonable) empirical evidence” that my (I emphasize: my Kickr; I probably bought one of the first ones sold) is strongly temperate-warm-up dependent.

Is there a fix/update for my Kickr? (even if it includes a new temp sensor or PCB board? Being an electrical engineer, this problem is not surprising and is simple to solve with a simple correction feedback control).

The response was nice (as always: thank you Wahoo) but left me a little disappointed:

We could potential replace the PCB for the unit, however both the technician and developers feel that it would not fix your power discrepancy issue. Another solutions they is a full repair/refurbishment. However the repair/refurb process will mean that you will end up with a replacement unit of near equal age. So if the issue is related to how the PCB thermometer for the 2014 KICKR is handling the temperatures of your room, then any replacement unit will likely have the same problem. The suggestion that both the head technician and developer feel is likely to solve this issue is moving the unit to warmer location in your house.

It really shouldn’t be that hard to have effective temperature control (negative feedback control loop) on the Kickr to compensate for ambient temperature that is cold (say 40F) given that the internal Kickr seems to need to converge to about 75-85F (who rides indoor at 80F?) for accurate power reporting. And it’s sad that if there’s an issue with the first version of the Kickr, that that issue “couldn’t” be fixed: surely, suggesting in Feb 2018 to sell me the same PCB of an old, refurbished 2014 Kickr with same lack of temp adjustment won’t solve the problem. I teach service operations and root cause problem solving to my MBA students and while the service communication has been wonderful, the root cause of this problem remains as of today…

25 Responses to Did my cycling power really increase this winter on my Wahoo Kickr? Power accuracy and thermal drift on my Kickr